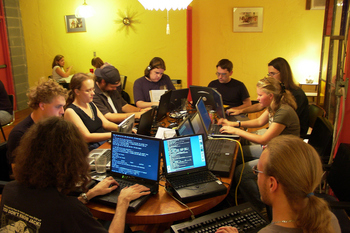 OK, so I'm a lazy bum and didn't post for all of October. Sue me. I did take some photos at the meetings and stuff, so feel free to browse in the photo gallery. It's November, and I've finally made myself do something on the site. I'm working on making the page a lot better and easier to update, so be patient if it seems i'm not doing anything. I'm working on creating more stability in my life (both financially and otherwise), and it's been quite a bit of work and stress. 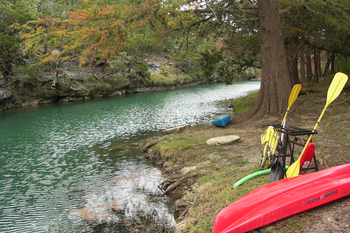 11-17-2003
I just got back from the HEB camp near Kerrville with the young adult/college/whatever group from Central Assembly. Had a good time, took a few photos before my batteries ran out and I realized I didn't have spares or a charger with me. oh well.

The 2600 meeting on the 7th also went well, we had about 20 people show up, and had fun. I've finally posted all of the photos from the past month or so, so you can check those out on the photos page. Still working on redoing the site and stuff. Hopefully, I will get that and another project or two finished soon. 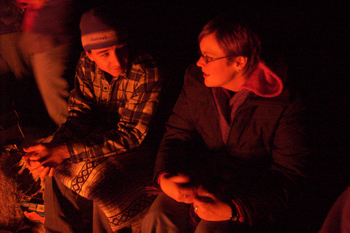 Sorry about the long lapse in update - life has been taking quite a few turns lately. I misplaced my spare camera batteries and charger, so I haven't been able to do much in the way of daily pictures, but thanks to Ryan and Meesh, I've once again found them. Thanksgiving was good - my family spend the holiday with my sister's new in-laws, and I had a nice nap while everyone else watched theCowboys get whooped. The monthly 2600 meeting was quite small, as there were a lot of holiday-type parties going on for most of the regular attendees. I've spent a lot of time recently at Mojo's, as some of the more recent photos reflect. The Central Assembly college/young adults/whatever group had a bonfire/hayride out at my brother and his wife's ranch, and I got some photos out there, so check them out. I experimented with the temperature balance, and found that bonfire light has an odd temperature color, similar to tungsten, but it appears to be a bit cooler, and comes out somewhat magenta when filtered for tungsten. It's actually quite similar to the color i got when shooting a photo utilizing very low-power tungsten bulbs (christmas lights) over a long period of time using daylight film without a filter. I think I like the bonfire shots without the tungsten filtration, as the tungsten-filtered shots just look like they're poorly balanced altogether. Oh well, off to working on stuff. More updates soon. 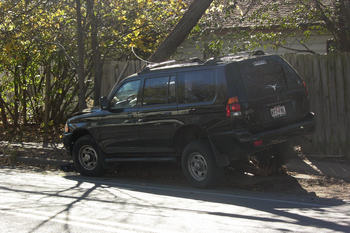 12-10-2003
I woke up this morning to a loud BOOM, and the power going out and all the UPS power backups beeping. My first though was "oh great, a transformer blew up". Thomas and I walked outside (as indeed it woke him up too), to find this. Somehow, one of the frat boys from across the street managed to get up enough speed (and stupidity) within half a block of his driveway to snap a telephone pole in 3 pieces with his SUV. The alleged reason? He was reaching into his back seat to stop some orange juice from spilling. The official press release can be found here. 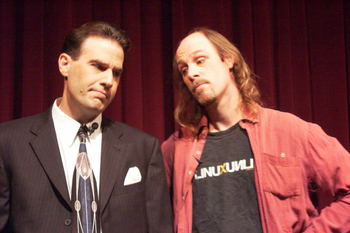 12-11-2003
I did some stage photography for a play my brother is directing called Christmas Shoes. Click here for the full set of photos. My sister Alanna is also in it (as a dancer), and i got a neat shot of her dancing. Off to bed with me now. 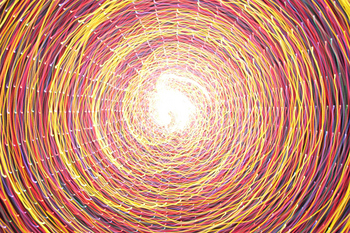 12-19-2003 I'm in this really creative mood, and I don't have any outlet for it right now. Argh. I wish I had a studio to do some photography work in right now. I really need to get some better equipment to work with. My little digital camera's inability to focus on what i'm shooting continually disappoints me. It insists on focusing on backgrounds rather than subjects. Oh well - some day soon, I suppose.

The group did the usual Flightpath thing, and then we went and saw Fethr and her dance company do Hungarian dances on the stage at the end of the Trail of Lights. We went to the Zilker tree, had kettle corn, and hung out at the yule log for a bit. Then we went to 37th Street and looked at all the lights and stuff. I took some photos (while battery life permitted), and then made the usual journey to Kerby, and the usual hilarity ensued.