It's September, and I feel like I should put something new up, so here it is :). Jay and Bill and Jake made it on their road trip to San Francisco intact, with only a few minor breakdowns :). You can check out documentation of their shenanigans at g-cipher.net. I'm going to be doing some road-tripping myself soon, so when I'm finished, I'll have lots of photos to post. Vacation time is approaching rapidly, and I'll be heading far away from most anything. It's been a long time since I've taken a road trip, but it seems the most relaxing thing in the world to me. i love traveling to new places. The trip ends up being a more important part to me than than the actual destination.

Just got back from STOICON and had a blast. It was great getting together with such a great group of people. For the unenlightened, stoicon is a gathering of people from all over the world (this year just the western hemisphere, but i'm hopeful for some european folks next year). The tying thread between all these people is that they listen to an industrial music internet radio station called ampedOut. Myself, Thomas, and our friend Drew from Dallas took a road trip to good ol' Kansas City. We went, we saw, we had a great time. Kudos for the stoics for opening their home to us. I am looking forward to next year when we get to do it again :). Check out some of the pictures I took! 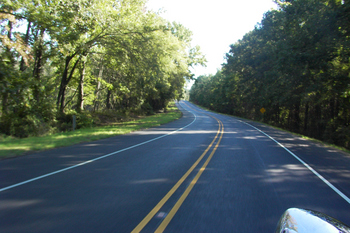 12:30 pm
I'm stopped at a rest stop in Arkansas, sitting here taking a break after driving all night and morning. Louisiana was a pretty drive, and has been the most enjoyable part of the drive visually. Unfortunately, the roads signs are not quite as up to par, and i had to backtrack more than once to get onto the correct road. After spending an hour or so lost in Shreveport and having to slow down to 25mph in nearly every town in Louisiana, i am 2 or 3 hours behind what i had originally planned. hopefully the rest of arkansas and missouri will not be so bad and i can keep on pace. I also learned that red bull/sobe adrenaline rush/dr.pepper don't keep you up forever, especially if you're not well hydrateed. I am feeling much more awake now, though. more later 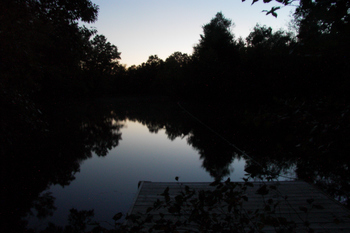 Just thought i'd take a little time time from my vacation to write. I think sometimes it takes a little separation from the things that make a diffence in your life to remember what they are. There is an old TV in my cabin, and today I turned it on to the local PBS station to see what was on. I found that Austin City Limits was on at 9 tonight. So at 9, i tuned in. There was an austin band named spoon playing, and then another act, a kid named ben kweller and his band. I miss listening to good live music. I am reminded of when i used to go listen to my friends in the band Chapter 41 play in Austin (and once in College Station). Good times those were.

As you can probably tell from the entries and photos above, I am back from vacation and refreshed (but a bit tired). I stayed for 9 days at a cabin at murphy lakes in central Missouri. I had a great time, and took lots of photos. Check them out!