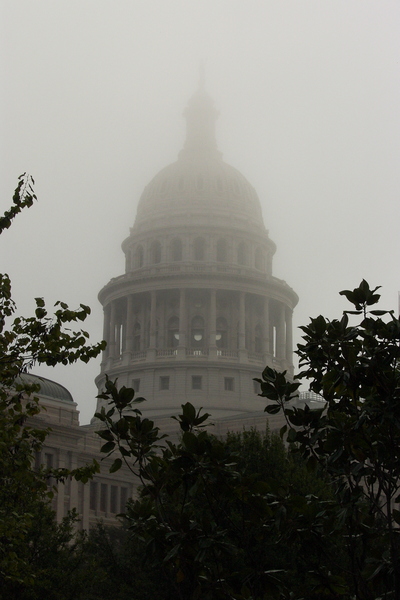 Life, such at it is, has lately kept me busy and distracted. After being laid off, I found a new job as a sysadmin/upper-tier support tech at a datacenter here in town. Cathleen and I took a vacation in Port Aransas about a month ago, which went well. We got to take in the town in the slow-paced fashion it was meant to be. Beeman's coffee shop shut down just after the last time we went, and was replaced by a place called Java Beach, which was utterly disappointing. The next day we visited Cotter Street Coffee House, and found it to be a much better experience. We talked to the barrista, who had come from Austin with her husband who was studying at the UT Marine Science Center.

Election day was a couple of days ago, which proved rather eventful. I had been working on a server overnight just south of the river, and thought I'd drive up Congress Avenue on the way to vote to get a nice morning view of the Capitol as I drove north. It seemed fitting to find the Capitol dome shrouded in fog on the morning of elections, with the Goddess of Liberty virtually invisible in anticipation of the upcoming election results. All in all, the elections seemed to go well, and it will be interesting to see what happens with the Democratic majority in both the House and Senate in Washington.

Unsuprisingly, Rick Perry won the governor's race, but only with 39% of the vote. Chris Bell got 29%, equal to the 2 independant candidate's votes combined. I think this says a lot about the state of politics today, where such a large percentage of the population is dissatisfied with the established parties and is willing to put its vote in for an independant candidate.