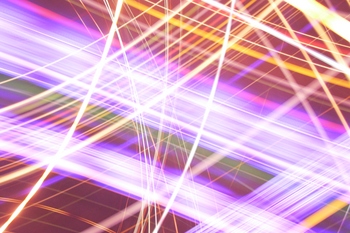 So here we are again, dear readers, months since my last post. Life has taken up most of my free time lately, hence the lack of updates. Many things have happened since my last post... as I mentioned in October, I ditched the tech support gig and got a real job as a Network and Systems Administrator for a small local web design/backend database design/colo/webhosting business here in town. Our network is (thankfully) mainly UNIX-based, and becoming moreso as time goes on. I would have to say this is probably the first job I have genuinely enjoyed in my time as a working-class citizen.

In other news related to the image on your right, my friend Ryan Gallagher has turned me on to his experiment in photography he calls "camera tossing". It began as frustration with his rather inferior digital camera and its poor nighttime image capturing abilities. What did he do? He tossed it in the air, and found the effects made by the movement of the camera and the nighttime lighting intriguing. He posted his results to his account on flickr, a kind of social networking site for photographers to share their work. Somewhere along the way, Camera Tossing became an object of trend and popular attention. Suddenly, websites like Fark began to link to the work of camera toss community. Ryan subsequently created a blog on Blogspot to showcase the work of the Camera Toss community. Then came the media coverage. First, Canada's Globe and Mail wrote an article about the phenomenon of camera tossing (sorry, the site requires a login, but you can find the important parts of it here on the Camera Toss blog site). Ryan was soon contacted by the Washington Post for an interview, and published an article on the front page of their arts & entertainment section. About the same time, a german newspaper called Der Spiegel interviewed Ryan and published an article about Ryan and the Camera Tossing phenomenon. 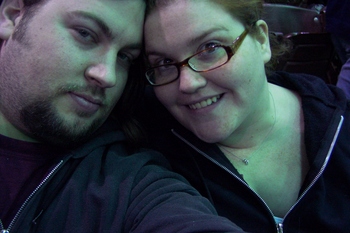 There were more articles written in smaller papers around the country. Soon following came an article in the London Times about Camera Tossing. Ryan was then contacted by Der Spiegel again, this time to put on a gallery showing of his work in Hamburg. Even more incredibly, Der Spiegel offered to finance the entire show, as well as fly Ryan to Germany for the debut. The show opened on Friday night (February 2nd) at the 3x23 Gallery in Hamburg, and the news from Ryan has been overwhelmingly positive. I highly recommend checking out the Camera Toss Group Photo Pool and the Camera Toss Blog. Ryan has created a site for his photography at kineticphotography.net, where you can view and purchase his photos. You can also check out the comparatively small amount of experimentation I've done with camera tossing on my flickr page at http://flickr.com/photos/ncongrunt/.

Yet even more news, I've been going out with a wonderful girl named Cathleen for 5 months, as of yesterday. You can find some of her photography on her website at cathleenivey.com. To your left is a picture of us at an Austin Ice Bats game. If you're in the Austin area and haven't been yet, I'd highly recommend going at least once - it's a blast. I'll have a small gallery of photos of the two of us up as soon as I finish putting it together. I have so much more to say, but I'll have to update later, as it's pretty late as it is.