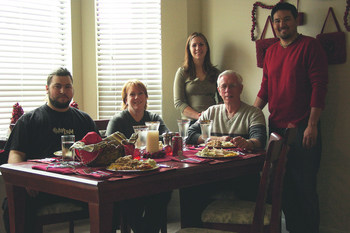 alrighty. so I haven't updated in a while... too bad. a contingient of the g-cipher crew headed down to San Antonio for Thai food at Thai Chili. That place is so teh yum. Last time I went there was about 2 years ago, with Forrest, Jacob, and some other folks. Thai Chili has a spiciness rating scale by which you order your food. The normal threshold is 1-10. You can however get it much spicier. Last time I got 11, and it was just spicy enough for me. Since that time I have acquired a taste for nuclear tacos and Freebirds burritos drenched in habanero sauce, among other spicy concoctions of my own. My tolerance for spicy food has gone way up in the past 2 years. Last time I ordered an 11 grade spicy dish; This time I opted for 20. When they brought it out, I had to ask them if it really was a 20, as it didn't taste all that spicy to me. They assured me that it was, and offered to make it more spicy for me. Thai Chili has an area near the front called the "Wall of Flame"; Forrest himself is on this wall, for eating and finishing a grade 50 dish. I was going to opt for 50 myself, when the waitress informed me that the bar had been raised to 100 for a place on the wall. I now consider myself a nuclear taco veteran, so I accepted the offer. They made me a 100-grade dish, and I commenced to eat. I had happened to order a saucy beef dish, and after the spiciness upgrade, this presented a problem with consumption, as I was now faced with trying to chew all of the spices in the sauce. The degree of heat was not unlike nuclear tacos, though in my judgement it was just below the nuclear taco level. The problem with having that much spice in a sauce, is that it's hard to chew. It's not unlike trying to eat the cracked red peppers you get when you order pizza, or perhaps maybe bird food. Other than the odd texture, the spiciness was quite tasty. I did finish my meal, and was treated to free ice cream and a spot on the Wall of Flame. I doubled Forrest's spice level (0WNED!!), and think next time I will do a 200. Next time will be something more like Fried rice, which would acommodate the spices a little better.

I had nuclear tacos last night (mmmm...) and had nuclear chicken tacos for the first time. Quite good. Nolan had his first (and second) nuclear taco, with help from our friend the klondike bar. He seemed to enjoy being there. :)

The unfortunate part about my heightened tolerance for spicy foods is that the other end of my digestive system doesn't seem to have caught up yet. :| like they (used to) say... nuclear tacos are free, but you pay in the end. [1]