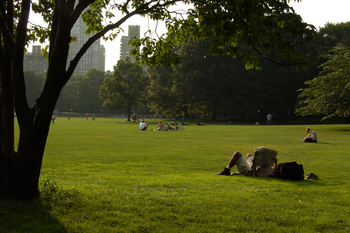 I just thought i'd post something or the other, as it has been something like 3 months since my last post. The Fifth HOPE conference went well, lots of fun to be had. I wish I could have stayed in NYC about a week longer, as I hardly got to see much apart from midtown Manhattan. I had to catch the bus before Jello Biafra's keynote, which was disappointing. I will say that riding the bus across the country wouldn't be my preferred method of travel, but it was what I could afford at the time. I got searched twice when my bus was "randomly selected for a search", a rather annoying and time-consuming process. I did manage to get some pictures the day before the conference when I and the friends I was with went sightseeing. I got a couple of nice shots of the inside of Grand Central Station, as well as Central Park, the UN building, and Times Square. I took some interesting night shots of the Empire State Building using Jonathan's new camera, which I will post as soon as I get a hold of them and get them onto my server. As for all the time between July and now, not much has happened. I'm boring sometimes, what can I say. I'll attempt to get more things posted soon.